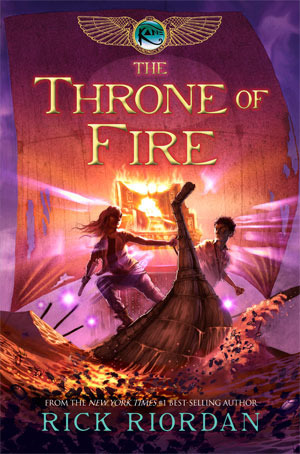 The Throne of Fire – Rick Riordan

“The right choice is hardly ever the easy choice.”

Okay, so this is going to be a really short and sweet review because I have almost nothing to say about this book! I had a full review of the first book which was quite positive, and the tag line of the review was literally me asking you not to sleep on it! Interestingly, after reading this book I have a lot of mixed thoughts on this series now!

I’ve read book 1 twice and thoroughly enjoyed it both times but had a completely different experience reading this book! I buddy read this with my friend Destiny and we both had very similar thoughts on this – not as funny as book 1, rushed, the middle dragged and the story never really fully caught our attention which really changed the reading experience!

On a positive note, something I did really appreciate about this book was how Riordan portrayed (at least in the beginning) Sadie as realistically tired of her new life. Like, she’s 13 and suddenly she’s got this whole new life, she’s also teaching other kids magic that she barely understands, she saved the world in the last book (a few months ago, at the start of this instalment) and now she has to that again and just thinking about that is exhausting to her. So she wasn’t to at least have a day off before she has to get sucked into saving the world. I really appreciate that because obviously being a “chosen one” or a hero in a situation like this would be so hard but so often heroes never even take a minute to be exhausted by it all!

So, I really appreciated that little aspect of the story, however in the rest of this book Sadie was annoying and, dare I say, boy crazy. I have never in my life read about a character as boy crazy as Sadie Kane! Which is actually kind of weird because this is a middle-grade book and Sadie is 13! I never went through the crushes thing as a teen so maybe this is just me… but the only thing Sadie likes about the guys she’s crushing on is their looks, it’s the only thing that she will make a note about it!
Also, I’m going to talk a lot more about this in my review of the third book, but I would like to point out that one of Sadie’s love interests is literally 5,000 years old. And, in case you didn’t see it the 3 or 4 other times I’ve mentioned it in this review… Sadie is 13! Ummm… gross! uncomfortable! Not fun or appropriate to read about!

“Sometimes, it takes us a while to appreciate something new, something that might change us for the better.”

So, there weren’t many positives to this book, but it was definitely better than book 3 so maybe that’s a positive in itself?

Unfortunately, I don’t have any profound thoughts on this book and nothing much else to really add, but here are some other random thoughts to make this review may be worth reading:

HAVE YOU READ THE KANE CHRONICLES?
an