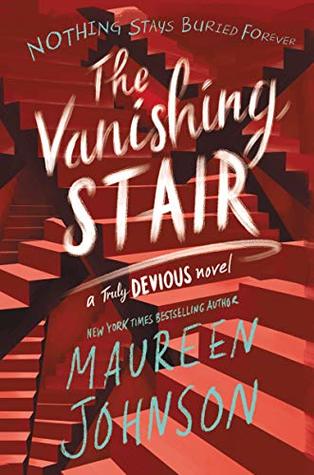 Honestly, this was good, but I preferred the first book. I’m finding that writing my reviews for each book in the trilogy is giving me a lot of perspectives. I enjoyed the books a lot when I was reading them, enough to want to reread the trilogy in the future. But, when I was writing my notes and now when I’m trying to write my reviews I’m finding that I don’t have much of anything truly positive to say about the series, other than that I like the anxiety rep, but everyone knows that by now anyway.

So, here’s my one positive note before I get onto my “eh” thoughts:

“What do you do when the devil turns up in your living room and offers you everything you want?”

Honestly, there’s more mystery in this book than in book 1 but mostly it just feels like “other” filler. I know I said this in my review of book 1 but, for a ‘mystery’ trilogy there’s really not that much mystery going on and I don’t know how I feel about that. Or maybe I do?? Look, I just wanted more mystery than I got. Also, I don’t think I like how Maureen Johnson writes romance.

I think I said this before in my review of Truly Devious, so forgive me if I’m repeating myself, but this really feels like it should have been a duology, but because it’s YA the publisher made it a trilogy. I don’t know why that a YA fixed trend but, I hate it. This series would’ve been a fantastic, keep you on your toes mystery with intersecting timelines and great character relationships and quality character depth, but instead we got a drawn-out trilogy that lags dramatically in the middle, with an unbelievable, erratic and irrelevant love story that I’m sorry, was NOT convincing in the least. You can’t just throw two teenagers together, yell “KISS” and expect me to believe they even like each other, let alone want to be in a romantic relationship with each other. Completely ridiculous.

“So much of anxiety was anxiety about having anxiety.”

Overall, this was good but not as good as the first book. This should’ve been a duology but YA is stuck in a mould it really should get out of & lastly, the romance was irritating and definitely not for me!

SHOULD TRULY DEVIOUS HAVE BEEN A TRILOGY OR A DUOLOGY?
ANY THOUGHTS ON THE MAIN ROMANCE IN THE SERIES?
an