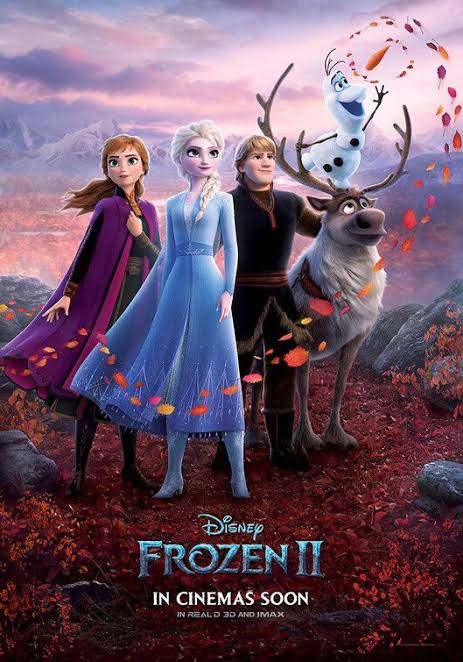 Hi everyone, welcome back to my blog! Today I’m coming at you with my SPOILER review of Frozen 2! You can find my spoiler-free review here, if you’re interested in that! You can also find my thoughts on the soundtrack here!

I’m currently writing this in pitch black darkness with zero electricity and I’m literally running on fumes because I’ve been out all day but I’m here to talk all the spoilery talk about Frozen 2! I’ve seen the movie twice so far and I’ll probably see it again with my younger brother ina week or two. SO far, my final thoughts are that it’s good and I *think* I enjoy it more than the first one, but I’m not really sure, they stand pretty equal in my mind.

Which Frozen movie did you enjoy the most?

Also, just a warning, this is not a particularly cohesive review, it’s just a lot of paragraph thoughts on different aspects of the movie that I wanted to talk about.

Here are my assorted, and not well put together thoughts on Frozen 2!

I can’t believe Olaf really grabbed me by the balls and said “Today you’re going to relate to a goddam snowman” and he was right. His whole thing about growing older? That hit me fucking hard, y’all and I think it will (and should) no matter how old you are, which is the real magic of it. His whole journey (that I hope will continue) about growing older and learning new things and feeling scared about the future really vibed with me and I know not everyone will appreciate it because he’s a kids character, but I think that this movie, and Olaf’s character, in particular, is going to leave a really great message with kids! This whole movie really was about teaching kids (and adults) that change can be scary but that it’s okay.

Also, totally random but I’ve been watching a lot of Avatar lately so it’s just now hit me Elsa is basically the Avatar now? So, because she’s a really good waterbender and she’s the Fifth Spirit does this mean she’ll harness all the elements in the future? Honestly, the first time I watched the movie and they started talking about water, fire, air, earth and I was like, Avatar avatar avatar…

Random things I wanted to mention:

I think what I appreciate most about this movie other than the soundtrack and it’s message, is it’s treatment of  Anna. Well… sort of. I still think she hangs off of Elsa like a bad smell with pigtails and she definitely has the worst song of the whole movie BUT I do think the latter end of this movie did a lot fo service to her as a character. She spends a lot of the movie trailing after Elsa so seeing her independent and taking charge and using her own skills did her a big favour. I’m hoping that won’t all be taken away in Frozen 3, and that both of the sisters will be proper equals, in this sense.

The whole “Two sides to a bridge” – Magic & humanity plot point/ reasoning gives Anna some purpose and dimension and also helps to subvert the chosen one trope. It also really helps to make Anna more of a character, in the past and for a lot of this movie I felt she was following Elsa around. (Though to an extent I can understand why I mean she didn’t really know or see her sister for so much of her life and now she’s sort of catching up!)

Would you prefer Elsa stayed single and focused on understanding and loving herself or do you think she should have a love interest and if so, who?

Frozen 3 is definitely going to be interesting! What do YOU think will happen?

Elsa and Anna are both individually so interesting and such good depictions of women because they’re not perfect and they both have different flaws! They’re both complex and nuanced! Honestly, I hope this stays throughout the series and the writers don’t try to be edgy and ruin the characters.

This movie actually does have some problems, here are a few:

Is Elsa an lgbtq+ character?

Should Elsa be gay or just promote self-love? Either way I don’t mind as long as she doesn’t get with Ryder I’ll be happy.

A lot of people are talking about Honeymaren but I barely even remember her which I think really says a lot. I’d be really interested to see what you all think of the situation because I really think Disney is going to continue queerbaiting and I’m not excited about it. I think it’s possible we’ll see an lgbt background character in the franchise in the future and I can see Disney using it as a big advertising plot but they’ll never make Elsa queer.

Why is Disney so afraid to make it gay? Honestly, I’m glad Elsa hasn’t had a love interest so far because this movie was about the development of the sisters, especially Elsa’s so I’m hoping that Disney will pull their head out and make it gay in F3. But, again that’s hope talking because I really doubt that Disney could ever pull their heads out of their asses long enough to include a well-represented lgbtq+ character?

HOW MANY FROZEN MOVIES DO YOU THINK THEY’LL MAKE?
HAVE YOU SEEN FROZEN II YET?
AND