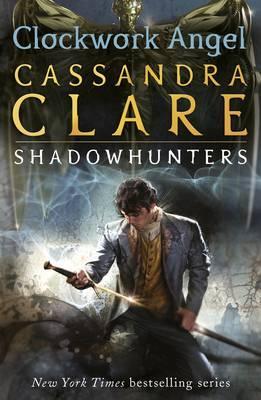 When sixteen-year-old Tessa Gray crosses the ocean to find her brother, her destination is England, the time is the reign of Queen Victoria, and something terrifying is waiting for her in London’s Downworld, where vampires, warlocks and other supernatural folk stalk the gaslit streets. Only the Shadowhunters, warriors dedicated to ridding the world of demons, keep order amidst the chaos.

Kidnapped by the mysterious Dark Sisters, members of a secret organization called The Pandemonium Club, Tessa soon learns that she herself is a Downworlder with a rare ability: the power to transform, at will, into another person. What’s more, the Magister, the shadowy figure who runs the Club, will stop at nothing to claim Tessa’s power for his own.

Friendless and hunted, Tessa takes refuge with the Shadowhunters of the London Institute, who swear to find her brother if she will use her power to help them. She soon finds herself fascinated by—and torn between—two best friends: James, whose fragile beauty hides a deadly secret, and blue-eyed Will, whose caustic wit and volatile moods keep everyone in his life at arm’s length…everyone, that is, but Tessa. As their search draws them deep into the heart of an arcane plot that threatens to destroy the Shadowhunters, Tessa realizes that she may need to choose between saving her brother and helping her new friends save the world…and that love may be the most dangerous magic of all.

“It’s all right to love someone who doesn’t love you back, as long as they’re worth you loving them. As long as they deserve it.”

Okay, so I know I just recently reviewed City of Glass so some of you might be like, whattttt??? But, I am planning on reading Cassandra Clare’s books in the Shadowhunter world in publication order, hence this being my most recent review – next, I’ll be reading City of Fallen Angels!

As for my first thoughts on Clockwork Angel, the first thing I noticed about this book was that this is straight up, a lot more interesting as a first book than City of Bones was. The characters are more interesting and pretty easy to distinguish between each other which I appreciated.

I also really like Tessa as a character – she’s sarcastic and I hate to say this, but, she’s significantly more interesting than Clary. I’m not sure if this is just the aesthetic of the book either, or if it’s the gloomy and mysterious backdrop of the novel because it’s historical London OR if it’s just better writing, but this book is significantly more interesting and enjoyable (to me) than the first three books in The Mortal Instruments series put together.

^ i finally get this reference oh my god

This is a long review and I do have some rather long thoughts and notes in here so, I just wanted to preface this here by saying that I did really like this book and if this one was anything to go by, I think I’m going to enjoy The Infernal Devices more than I am The Mortal Instruments!

So, here’s what I LOVED about the book!

•The cast of characters are very interesting – so far the side-characters seem to be really interesting (Sophie, Henry), whereas Will seems to be a carbon-copy of Jace and Jem seems under-developed (Jem’s characterisation certainly improves throughout the book, which I appreciated!)

•Explains the shadowhunter world and rules a lot more clearly than in City of Bones, though it’s a lot easier to understand after having previously read the first 3 TMI books.

•Tessa is feisty and sarcastic and I think I like her a lot. I was thinking that this was pretty mediocre in the beginning, though I am liked it A LOT more as a series intro than I did COB.

•You can tell that Jem & Will are really good friends – what I imagine Jace & Alec will develop to in later books. (Are you noticing that I’m having trouble not comparing the two series?)

•I really hope the witty banter continues between the main trio (Will/Jem/Tessa) – it’s a lot of fun to read but doesn’t seem to come up very often. Every Tessa said something sarcastic and funny I genuinely laughed out loud.

•Tessa is a bookworm and I always love a bookworm!

•I really like Jem – he’s very calming & patient which I’m enjoying. BUT I think that probably means he’s going to snap at some point.

How Does Clockwork Angel Differ From The Mortal Instruments?

I think just in general, the character interactions are different. In TMI there is more of a focus on family and sibling bonds which is what I enjoy about the series the most. And, in this series, there seems to be more of a focus on what it’s like to be in a broken family. So, I’m really enjoying those differences in the series and I’m interested to see how those themes develop as I keep reading.

“Tessa couldn’t help but smile. “It is a bit like they’re your children, isn’t it?” Charlotte sighed. “Yes,” she said. “Except for the part where they’re required to love me, I suppose.” “

^ This is probably one of my favourite quotes from the entire book just because of how much I love Charlotte as a character (she’s only 23 and she runs an entire Institute!) and I just want everyone to love her ya know???

This book is really starting to differentiate itself from TMI – it feels like more of a mystery with active problem solving, the characters feel more mature and older (acting their age, rather than having 16 yr olds acting like 20-somethings) and you can tell that while there are some strong bonds, it feels like more of a broken family . Charlotte feels unloved by the people who live in her own house/institute, Jessamine desperately doesn’t want to be a shadowhunter, Henry is deeply distracted by his work (ignores ppl easily, unsociable, getting autistic vibes tbh), Will/Jem are hiding a secret, and Sophie is just straight-up tired. It’s certainly an interesting dynamic, and I’m intrigued.

I have thoughts on Jessamine v Tessa & Izzy v Clary. Like, a lot of thoughts, so buckle up and maybe grab a snack?

My main thoughts are on Jessamine Lovelace because I think she’s a really interesting character that deserves probably more page time than she gets but. I’m slightly wary about how her character is going to be treated in the next books in the series. Jessamine is really interesting because I think she’s the first Shadowhunter character (apart from Jocelyn bc she’s boring) we’ve met who really badly doesn’t want to be a Shadowhunter and straight up doesn’t want anything to do with that world.

So, here’s my thoughts (commentary??) on Jessamine v Tessa & Clary v Isabelle because girl hate is a serious theme in these books and I’m not about it.

Interestingly, I think Jessamine and Tessa are written as polar opposites, much like Isabelle and Clary have been – I think this is a really bad trend in CC’s books that I’m not enjoying. I’m hoping I’ll be wrong and that Jessamine will be more of a complex character that Clare explores throughout the trilogy. But so far, I’m getting quickly irritated with how she’s being written – she’s very interested in fashion and very beautiful and really, there’s nothing wrong with that (like Izzy, unlike Tessa and Clary), but she’s also self-centred and standoffish (possibly for a good reason idk) – so far, the only thing to differentiate Jessamine from Izzy is the lack of affection she has for the other characters (Izzy is family-centric) and she is very rude (Izzy clears cares about everyone) also, obviously, Izzy likes being a Shadowhunter.

I don’t know if any of that made sense, but basically, I don’t like how the female characters in CC’s stories are always set up to hate each other. It ain’t pretty, it ain’t cute and I’m not here for it.

MY THOUGHTS ON WILL HERONDALE

My thoughts on Will Herondale? Yeah, look, so far I’m not loving him? I said this before, but he really does seem like a carbon copy of Jace, except he happens to be British and has black hair. He’s rude, he’s arrogant and he cares a lot about 1 single person until a mysterious girl walks into his life. Sound familiar??

There was an intriguing passage about Will’s character that really caught my attention, regarding Thomas that I thought was really interesting so I’m going to share it with you all here:

“When he’d reached twelve years of age, he’d been sent to the Insitute; at that time he’d still been so small that he’d looked barely nine. Will had made fun of Charlotte for wanting to employ him, but had secretly hoped he would stay so that there might be another boy his own age in the house. And they had been friends of a sort, the Shadowhunter and the servant boy – until Jem had come and Will had forgotten Thomas almost completely. Thomas never seemed to hold it against him, treating Will always with the same friendliness with which he treated everyone else.”

Also, spoilers for the end of the book, but are you telling me that Tessa likes Will even though he’s constantly being rude to her because she’s read Pride and Prejudice, and Mr Darcy was rude to Elizabeth and they got a Happily Ever After so that makes it okay??? How fuckn ironic.

•There are a lot of characters so I forgot a lot of people quickly, especially because we see some of them more frequently than others when they actually turn up I’m like, who??? Like, for at least the first 200 pages, I had no idea who Thomas was.

•Jessamine is soo rude – I’m intrigued to see if she’ll eventually betray them in book 2 or 3 or if she’ll surprise us and turn out to be a badass with a soft heart – or if that is Will’s fate. But, seriously, can’t a girl be complex without being absolutely horrible?

•I’m also intrigued with Jem’s character but, I feel like there’s going to be more of a focus on Will which is disappointing – though, I would love to be wrong on this occasion.

“Whatever you are physically…male or female, strong or weak, ill or healthy–all those things matter less than what your heart contains. If you have the soul of a warrior, you are a warrior. All those other things, they are the glass that contains the lamp, but you are the light inside.”

Ooof, that was a long review! Did you survive?? (lol include a watermelon emoji 🍉🍉 in your comment, if you did!) I seem to be reading some of these Shadowhunter books relatively quickly, and I managed to get this read in a few hours so hopefully you’ll be seeing a few more of my reviews popping up around the place! I highly recommend the audiobooks if you’re looking to read the books too!

Honestly, I’m almost annoyed that I’m reading CC’s books in publication order so I’ll have to wait to pick up book 2 in this trilogy. I’m definitely enjoying TID over TMI. Even though I did enjoy reading City of Glass, I am enjoying this “world” much more.

Do you prefer City of Bones or Clockwork Angel?