Hey guys, welcome back to my blog! Today I’m coming at you with my review of the live-action remake of Aladdin! I’ve already seen the movie twice and I plan on seeing it again sometime next week, and if I’m honest I’ll probably see it another couple of times after that because hey, I love this movie and I’m on break from school so I have the time.

My main piece of advice before seeing Aladdin is this: ignore everything you’ve seen for the movie because the marketing was awful and completely misrepresents the movie. Also, don’t compare Will Smith’s Genie to Robin William’s because if you do that there’s no way you’re going to enjoy the movie.

Okay, so I don’t know if I have explicitly said this yet, but I love this movie. I’ve seen it twice in the past week and I now have two new favourite actors: Naomi Scott & Mena Massoud. The movie, in general, was shot really well, looks beautiful and has an amazing soundtrack! It’s also really funny so it’s kind of everything you’d want in a live-action remake of a classic Disney film!

In terms of how I liked Aladdin as a film, compared to the other remakes, this is definitely my favourite by far! My previous favourite was Cinderella which I will watch every couple of months but I can see myself watching this even more often than that, it seems like my perfect comfort movie!

I have a lot of notes on this film so I’m going to try and condense it into an easy to read format: soundtrack, general thoughts, characters, and then any of the eh feelings I had about the movie. It’s a mostly positive review though so I hope you’re ready to hear me gush about Aladdin!

First up: The music!

That being said, this is now one of my favourite soundtracks after having seen the movie – and what I love about the songs especially, are how with the new singers + new scenes, some of the songs like One Jump Ahead, a song I’d always skipped in the original, is now my most listened to song, even after that masterpiece that is A Whole New World. So, I really recommend that after you watch the movie, you give the soundtrack another listen because it makes all the difference.

There are also some minor lyric changes throughout he film, most notably “Sunday Salam” from Prince Ali was changed to “Friday Salam” for religious accuracy and it doesn’t interrupt the song or anything, so it’s a win on all fronts. [If you want to know more about the subtle lyric changes or background changes in the film check out this article, it’s really interesting and really opened my eyes upon when I rewatched the film.]

Okay, so we’ve established that One Jump Ahead is my favourite on this soundtrack, but A Whole New World is definitely a close second, with Speechless also being an amazing new addition to the movie! In general, Naomi Scott is amazing and at this point, I will watch anything she’s in because not only is she beautiful and a great actress but her singing voice is phenomenal!

As well as the new lyric and dialogue changes they also added some new scenes AND a whole new character! They have Jasmine a handmaid named Dalia, she’s precious, very awkward and I love her. She deserves the entire world.

Other than Dalia, the only things of note are that we get more background on Aladdin’s parents and Jasmine’s mum. Also, Jasmine wants more freedom in this version, instead of just being able to pick her husband (like in the original) she wants to be Sultan because, nothing new, but she’s a total badass.

Also, in a total change from the original, the remake is hilarious – the characters have a few awkward scenes when they first meet and it’s hilarious! Also, just in general, the banter is really really funny!

The characters! Spoiler Alert: I love them.

Okay, so straight up, I love all of the characters in this movie (not Jafar, duh) – especially, the main trio – Aladdin, the Genie and Jasmine. They’re a great group and work off each other really well in their scenes, especially with additions like Abu, Carpet and Dalia.

My favourite friendships would have to be Aladdin and The Genie & Abu and the Carpet. AND my favourite romantic relationship is… *drum rolls for suspense* Aladdin and Jasmine! Betcha didn’t see that coming! 😂 All of the characters work amazingly off each other, but especially when they’re in these pairings! Aladdin and Jasmine, in particular, had amazing chemistry and also, die note, their costumes were so nice? and definitely the perfect cosplay materials? *sighs* I love them.

Jafar – Jafar actually got some backstory in the remake so we got to find out more about him and his past and without spoiling, he is essentially how Aladdin could turn out if he took a wrong turn, which I found really interesting.

Jasmine – Jasmine has always been a badass, but the remake gave her a bit more depth and really fleshed her out as a character. She wants to be Sultan and really does the work to try and make that happen – you can see that she cares about the people and is actively trying to learn how the whole Sultan gig works. She also actively teaches herself about the world through books and maps!

The Genie – Will Smith totally smashed this role, he’s sassy, full of heart and never tries to be Robin Williams. He was really funny and made the character his own which was really great to see! He’s not blue the whole time but honestly, even when he is blue it’s not an issue! Also, something I noticed is that in the original, The Genie feels like more of a father figure to Aladdin but in the remake, they actually feel like friends which was really nice to see, honestly all of the characters just have great chemistry with Aladdin (romantic or not) and it’s so nice to see? Also, another thing I love, Aladdin and The Genie have no problem with straight up holding anyone’s hand throughout the film and I love them for that.

Aladdin – APrkour Aladdin is a thing and I love it! Honestly, Mena Massoud is the perfect Aladdin, he’s got the smile and the voice and I think if they had cast someone else the movie wouldn’t have been quite as good. Honestly, he just seems so seamlessly good in the role and I can’t wait to see what he does next! (hopefully, an Aladdin sequel?) 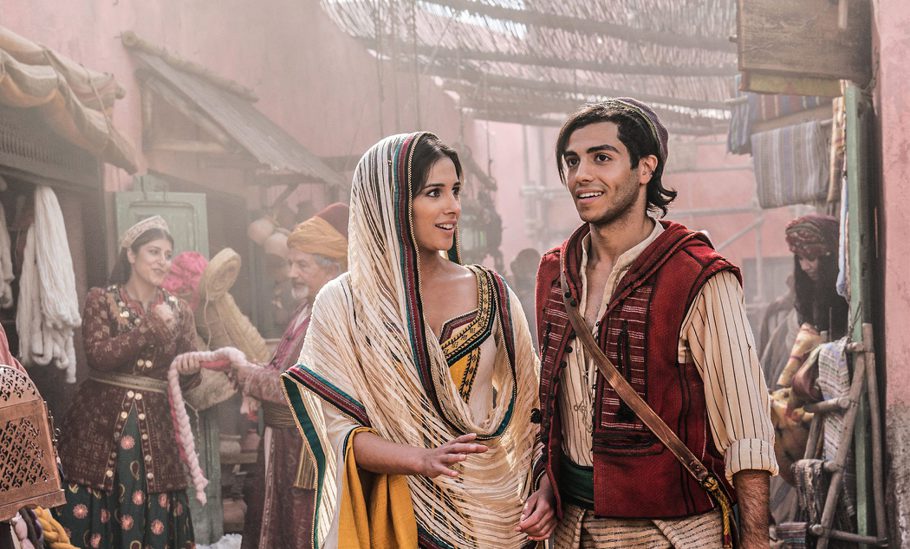 I have very few gripes with this film but the main one that is a bit weird is mainly at the beginning of the film during One Jump Ahead and then at the VERY end of the film during another song, but I think there was a bit of a problem either with the recording of the song or the actual filming. I think what happened was they recorded the songs separately and they filmed all the scenes and then realised the actual scenes didn’t quite match the pacing of the song so they sped the actual movements in the scene up so it looks like it’s on fast forward. But the song is still playing at its normal pace and Mena still looks like he’s singing normally, just a little fast. Like I said, it’s a little weird but it’s in the first 20 minutes and you forget about it pretty quickly because I don’t think it happens again.

Aaand, that’s really it! I liked the characters – even Iago, he was very interesting for an evil bird. And visually this movie was stunning, getting to see AGrbah in that light was so amazing! All up, I loved this and it’s without a doubt, my favourite live-action Disney remake so far! Everything that usually bugs me about other live-action remakes like Beauty & The Beast is that they seem a bit low-energy whereas this one had me singing the lyrics under my breath and wanting to learn the choreography. Everything about this movie is upbeat and fun (except the Jafar scenes because duh he’s the villain) – it’s a brightly lit film with an amazing cast, what’s not to love? I can’t recommend it enough!

HAVE YOU SEEN ALADDIN? ARE YOU GOING TO?

*NO SPOILERS* DID YOU HAVE A FAVOURITE SONG? WHY?