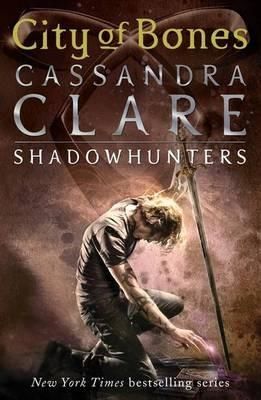 When fifteen-year-old Clary Fray heads out to the Pandemonium Club in New York City, she hardly expects to witness a murder― much less a murder committed by three teenagers covered with strange tattoos and brandishing bizarre weapons. Then the body disappears into thin air. It’s hard to call the police when the murderers are invisible to everyone else and when there is nothing―not even a smear of blood―to show that a boy has died. Or was he a boy?…

►Simon Lewis → Clary’s best friend, Mundane. Funny, in a band with no name.

►Jace Wayland → Shadowhunter. Blond hair, cocky/arrogant/straight up mean. Can be funny, depending on your humour. I personally don’t like him if you hadn’t already guessed. Honestly, I imagine he’d fit in really well in a show like The Bold and the Beautiful, he’ so dramatic.

“It means ‘Shadowhunters: Looking Better in Black Than the Widows of our Enemies Since 1234’.”

Okay, so I’ll address this in a later post at some point probably but I have a pretty rocky past with Cassandra Clare. I’ve read The Mortal Instruments before and wasn’t a big fan but finished the series because peer pressure is real. I didn’t enjoy most of the characters or the plots and it pretty quickly became a big thing to hate on CC so I semi-jumped on that bandwagon. Hence, the name my friends and I adopted for her, “Casserole Clam”.

Anyway, lately, I’ve realised that my views of CC were unfair and that I needed to take a serious look at how I view her and her books, so I decided to give this book a try and see where I go from there. So here we are, at my City of Bones review. I hope you enjoy!

“Where there is love, there is often also hate. They can exist side by side.”

My main good thought about City of Bones is that I didn’t hate it! I went into this with an open mind but I really wasn’t sure how I would feel about the book since it was written so long ago!

Annnnd… that’s somehow all the positive notes I had on the entire book. WOW. So here are some quick and fun bullet points because I did actually enjoy my time reading this.

“Keep in mind that when your mother fled from the Shadow World, it wasn’t the monsters she was hiding from. Not the warlocks, the wolf-men, the Fair Folk, not even the demons themselves. It was them. It was the Shadowhunters.”

It’s pretty easy to take the Micky out of the book, to be honest. Here’s a legit note I took while I was reading and it’s lowkey hilarious because I’m clearly a mess. ↴

“Jace is real fucking dramatic about his past. *Yeah, my dad’s dead he got me an eagle, I’ve seen blood blah blah *looks over into the distance* I’m so badass and mysterious, look at my hair.*”

Basically, the characters are REALLY dramatic and also very very young at times. Also, here’s something that bugged me the entire time I was reading the book. How the hell old are these characters??? In the beginning, I got the impression that Clary & Simon were underage and I feel like someone mentioned they were 16 and Alec was 18 (…I think) but the way they talk, they manage to sound both incredibly young & naive and also like they’re in the mid-twenties. So, yeah, some major character wobbles but, I’m hoping that will be ironed out in later books because characters talking like this ↴ every couple of pages is not only gross but, it’s also… wait, no, it’s just gross.

“Don’t.” Clary raised a warning hand. “I’m not really in the mood right now.”
“That’s got to be the first time a girl’s ever said that to me,” Jace mused.”

Also, isn’t Jace meant to be the best Shadowhunter of all time and isn’t Izzy meant to be a super-sl*t? Or am I misremembering from the show and Clary’s super fun and excessive hatred for girls who don’t look, speak and act like herself?

Jace is described as one of the best Shadowhunters of all time but he’s also super unobservant and gets surprise-attacked & injured a bunch of times throughout this book, which is honestly baffling and also hilarious to me. Because he’s a kid and this whole plot-thread rings false to me.

Also, now let’s talk about the girl hate because I know that this book was written in 2007 and all women in literature hated eachother in the early 2000s but like, Clary doesn’t ever have even one nice thing to say about Isabelle and it’s harsh af. Like, there’s a scene where Izzy loses Simon at a party and starts crying. Like, ya girl is stressed and probably also really tired and you’ve legit left her to babysit your basic b*tch best friend, and now your boyfriend’s sister is crying because you can’t be a beautiful badass all the time ya know??? ya know???

Basically, in order for me to not want to continue banging my head against the nearest concrete wall over this issue I’m going to need CC to work on a wonderful and thriving group dynamic. I need ALec to get along with at least one character and if that character end up being Clary and they end up becoming friends that wouldn’t b the s worst thing in the world. And, if Clary and Isabelle also became friends I’d be down with that too. (or, lbr, she could just dump Jace like the boring bag of sh*t that he is and just date Izzy, if you’re picking up what I’m not so subtly putting down.

“To love is to destroy, and that to be loved is to be the one destroyed.”

Overall, I went into this with low expectations, I really wasn’t expecting to enjoy this, let alone come out of this wanting to read the rest of the books set in this world. I had some issues with this because let’s be real, it’s a debut novel and it’s from a million years ago. But, in all honesty, this book was a fun time and I actually had some really different thoughts on the characters with this re-read and I was really digging the experience.

I’ll definitely be re-reading the rest of the series and maybe continuing on with CC’s other books (don’t get too excited, we’ll see) in the Shadowhunter world. Honestly, I’m pretty excited about this whole thing. Let me know if you want me to review the other books in the series!

Have you read City of Bones? Should I Read more of CC’s books?