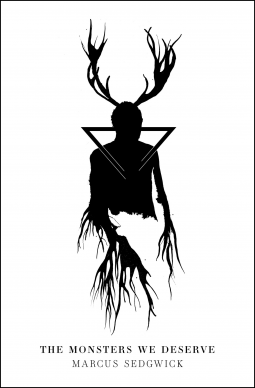 TITLE: The Monsters We Deserve

SYNOPSIS: The Villa Diodati, on the shore of Lake Geneva, 1816: the Year without Summer. As Byron, Polidori, and Mr and Mrs Shelley shelter from the unexpected weather, old ghost stories are read and new ghost stories imagined. Born by the twin brains of the Shelleys is Frankenstein, one of the most influential tales of horror of all time.

In a remote mountain house, high in the French Alps, an author broods on Shelley’s creation. Reality and perception merge, fuelled by poisoned thoughts. Humankind makes monsters; but who really creates who? This is a book about reason, the imagination, and the creative act of reading and writing. Marcus Sedgwick’s ghostly, menacing novel celebrates the legacy of Mary Shelley’s literary debut in its bicentenary year.

Thank you to Head of Zeus for supplying the e-arc via Netgalley in exchange for an honest review.

This book is a clusterfuck of nothing and I was sorely disappointed by it.

I’ll be completely transparent with you guys, I requested the book purely based off the front cover and because I’d read and enjoyed some of the author’s works in the past. However, this was a huge mistake for me. I never read the blurb because I generally don’t do that for most of the books I read, and I won’t be making that mistake again with a Sedgwick novel.

I had no idea what this was about and so I had no idea what to expect. The story launches completely into itself with no explanation and no way for you to understand the context of the situation without having read the blurb for the book. I hate this about books. I don’t read blurbs and I know a lot of other people don’t, so when I started this I was at a loss for what was happening. This book is confusing and strange, a combination that doesn’t always play out well.

You’re better off reading something that can do this better like The Raven Cycle or Space Opera if you’re looking for a weird story.

I mean, wow… what can I say? This was my first 1 star of 2018. The Monsters We Deserve really takes the cake! It even beat out Zenith, which I only rated 2 stars, for my worst read of the year!

This book has received a lot of 4 and 5 star reviews but I think it really missed the mark for me. In general, a lot of things were about this one. The writing style was pretentious to the point where he was coming off not only as rude but as judgmental and arrogant. Also, at one point in the beginning of the story, and this is what really gets me, he schools the reader on how to use a comma. Thanks, you pretentious asshole, I’m a literature student, I know how to use a comma. And then throughout the whole novel, to keep this pretentious and horrible book going he proceeds to place a whole lot of unnecessary commas in his book. I just hate it so much???

There was so much borderline offensive stuff in this that is never ceased to piss me off. I basically hate-read this and would never have finished chapter 1 if this wasn’t an arc copy. Throughout the book, the author continually treats his reader/s as if they are dumb and no better than the dirt under the author’s shoes.

(There’s also another instance where he goes over what the word for-bidden means. Honestly, this did nothing to help him because the book already feels as if the main character looks down on the reader. You don’t sound smart, you sound like an asshole.

And this is a really minor note, but considering this book is only just over 100 pages, it took me a ridiculous amount of time and determination to finish it. 4 days and something like 40 notes left on my kindle as a result of this book. What a wild ride of hatred and rage.

“I would like to mention that you sent me here, It was your idea.”

WHAT DID I JUST READ?

My main takeaway from this book is that the author didn’t know what he wanted it to be. There is so much genre-splicing that it’s silly. This book feels like the author was trying a whole bunch of different things all in one go and it didn’t pay off. If anything, it felt unedited.

In the beginning, I could picture this as one of those shitty fake-deep oscar nominated movies that you get around the Summer time. Then it turned into a mystery and then a ghost story then a weird coming of middle-age story and then it was straight up an analysis of Frankenstein ft. Mary Shelley was racist and also classist (duh) and also here’s an a-z of why you should not read this book. I saw another reviewer say that reading this was like reading a thesis on Frankenstein and I have to say, I completely agree with them. [LINK]

I titled this section the way I feel because at this point it’s 6:15 at night and I’m tired and I just want to go to sleep. This book was just over 100 pages and yet it managed to piss me off completely and really turn me off the author’s future novels. It grated on my nerves and irritated me the entire time I was reading it. It was also so repetitive I

couldn’t believe what I was reading. At first I thought it was just a typo because i was reading an advanced copy but… the repetition stayed throughout the whole novel and it was confusing and weird. It honestly felt like Sedgwick was just trying to get the word count up and thinking his pretentious writing/character would cover him for this one.

Here are some examples if you think I’m being dramatic:

The main character is dramatic and obsessed with Mary Shelley and her book, Frankenstein. I’m not entirely sure what the author was trying to accomplish with this book. Maybe he just got fed up one day and wrote a book trying to prove that the author is sperate from their works??? I don’t know, but this book turned out to pretty much just be an ode to why the dude hates Frankenstein.

SO, DO I RECOMMEND IT?

Honestly, no. I thought it was pretty terrible. But maybe if you enjoy Frankenstein or have to do an analysis on the book, this might be the novel for you.

Take my review with a grain of salt though, because as of me writing this, I am the only reviewer to have rated this one star (out of 54 reviews). That being said, it’s still a pretty new release and not many people have actually read it yet.