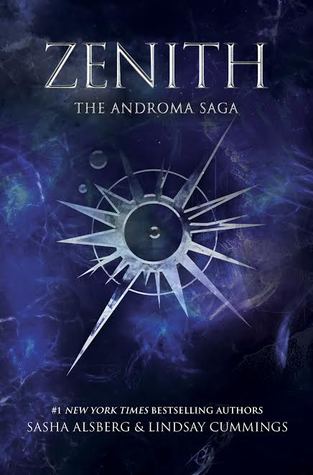 Most know Androma Racella as the Bloody Baroness, a powerful mercenary whose reign of terror stretches across the Mirabel Galaxy. To those aboard her glass starship, Marauder, however, she’s just Andi, their friend and fearless leader.

But when a routine mission goes awry, the Marauder’s all-girl crew is tested as they find themselves in a treacherous situation and at the mercy of a sadistic bounty hunter from Andi’s past.

Meanwhile, across the galaxy, a ruthless ruler waits in the shadows of the planet Xen Ptera, biding her time to exact revenge for the destruction of her people. The pieces of her deadly plan are about to fall into place, unleashing a plot that will tear Mirabel in two.

Andi and her crew embark on a dangerous, soul-testing journey that could restore order to their shipor just as easily start a war that will devour worlds. As the Marauder hurtles toward the unknown, and Mirabel hangs in the balance, the only certainty is that in a galaxy run on lies and illusion, no one can be trusted.

If you want to check out any of my notes I wrote while I was reading Zenith you can find them here.

I’ll be honest, this book has more issues than anything else. That being said, it is Sasha Alsberg’s debut novel and you can’t expect a debut novel to be perfect (though, Lindsay Cummings, her co-author, has written at least 5 other books).

Before I really get into the review, I’ll just get into my overall take away from Zenith is that it felt rushed. I feel like they released their 60 page version of Zenith (it was going to be serialised) and then they got picked up by a publisher and then all of a sudden they have to get a whole book out and it wasn’t ready or they weren’t ready. Either way, the book doesn’t flow or make sense the same way I feel like it would if the authors had been given more time to write then the novel would have come together more easily.

This started as a 60 page ebook and turned into a 530 page book. There will also be a second novel though I don’t know if it’s a duology or if there will be more novels in the series.

So, unfortunately, I think that I need to preface this review by saying that I am not here to hate on Sasha Alsberg or Lindsay Cummings. I requested this book on NetGalley because I wanted to help to support Sasha, I am pretty excited for all the Booktube books that will hopefully be starting to pop up every now and then. I did not pick up the book to hate on Booktubers, and I will not be hating on the authors, only reviewing the book.

Basically, there were too many povs. I ended up forgetting whole characters because some were quite sparse compared to others. And also, some characters were just so terribly introduced that apparently there’s a character called Brek (Brec? Breck??).

Who do I remember? Dex, Andi & Valen… that’s basically it. I really couldn’t tell you any of the other names because honestly, a part from the last 20ish pages, the book just wasn’t memorable for me.

The writing is choppy. No offence to Sasha but, the writing kind of reads the way she speaks. Honestly, the writing (and plot) is a bit everywhere & it doesn’t always make sense, but 60 of the time we get the overall message.

The writing is also quite formal in the dialogue. I mean, these people are a team, they’ve known each other for a while and they’ve gone on multiple missions together, so why do they talk to each other like they’re in a work meeting? But, then again dialogue is usually pretty formal in ya lit… so maybe I’m nitpicking.

This is a heist in space, that is the main plot of the book. And yet, you’re not even halfway through the book and the heist is over. And now, e have 300 pages of just… what? Extra crap?

OKAY, BUT WHAT WAS ACTUALLY GOOD, THOUGH?

Overall, I had a pretty bad time reading experience with this book. Though, I did appreciate the female empowerment aspect.

There will be a second book but I really don’t know if I will continue, I would have to read some reviews and see some awesome improvement in the writing before picking it up.

HAVE YOU READ ZENITH? DO YOU THINK YOU WILL PICK IT UP?

17 thoughts on “ZENITH SPOILER-FREE ARC REVIEW | not all bad, not all good”