Preface: I have seen the original film (Jumanji -1995) twice in my life. The first time I got about halfway through before I was scared shitless and so I only finished it a year later. And so, because I’m a badass, and for this review, I have braved a childhood (life) fear and watched the original film. You’re welcome, and yes my child mind made shit u and that was definitely not as scary as I thought it was when I was 7.

HOW DOES THIS FILM COMPARE TO THE 1995 ORIGINAL?

The writers and directors did so well with this film! It was a great ode to the original movie and I really enjoyed it, there were so many nods to the original and I had a lot of fun spotting them when I went and watched the original a few hours later.

Overall, if you are a big fan of the first film you will really appreciate this continuation. It really shows the power of Jumanji, it’s a film with heart and a lot of laughs.

Going into the film I really wasn’t sure how it was going to go. I thought that it would be a pretty meh film because usually if you put a whole bunch of “big names” together, the result just isn’t worth the money the company paid to get the cast together.

But, with this film, it just worked. The Rock, Kevin Hart and Jack Black are all naturally funny cast members, Karen Gillan played an insecure, badass teen like a pro and Nick Jonas was spot on in his role.

Also props to whoever is in wardrobe because the outfits were spot on.

I mean look at these guys and tell me they don’t look like video game characters.

I loved how the characters make fun of video game stereotypes. Why am I wearing this? HOw is a crop top, shorts and a weird harness going to help me in a jungle? The film also plays with high school stereotypes and flips them on their head throughout the film which I really enjoyed, it was about time.

THE CINEMATOGRAPHY WAS AMAZING This film was actually shot like a video game. There were cutaways for flashbacks, there were cut around in the action scenes and I don’t know how to explain it but it just looked and felt like a videogame.

There is no girl hate, they actually talk to eachother!

Everything is green and I love how this film ties to its predecessor.

IT MADE ME THINK/ WHAT A GREAT PREMISE!

I said this before but I’ll say it again, this film really doesn’t shy away from the power of Jumanji. In the first film the game brings Jumanji to Alan and Sarah, but in the 2017 adaptation, the game adapts to the modern world by transforming into a video game (which is terrifying) and then sucks the characters into the game where they play as characters – play or die.

So, I loved this film, it made me think. I was literally up all night (into the AM) writing out conspiracy theories and trying to understand the complexities of Jumanji. And, I am getting nowhere (blog post coming soon!), but I’m having the time of my life trying to figure it all out! 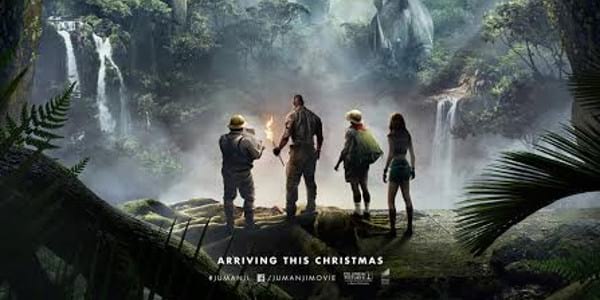 I think, what really struck me about this film was Nick Jonas’ character, Alex. He thinks he’s been playing the game for something like 3 months but in reality, he’s been missing for something closer to 20 years. If that doesn’t fuck with you, I don’t know what will. I mean, doesn’t that perfectly display how batshit crazy powerful Jumani is?

Jumanji is literally a world that adapts to our world. I mean, they literally got sucked into the jungle Alan Parrish was in for 26 years in the first film. And I’ve got to say that is definitely the best movie tie-in I’ve ever seen and I will never get over it.

If they end up making a third film I will definitely see it. It would be really interesting to see how they changed up the game (literally) this time. An arcade perhaps?

HAVE YOU SEEN JUMANJI: WELCOME TO THE JUNGLE?

One thought on “JUMANJI: WELCOME TO THE JUNGLE SPOILER-FREE FILM REVIEW”