The Flash Volume 2: Speed of Darkness 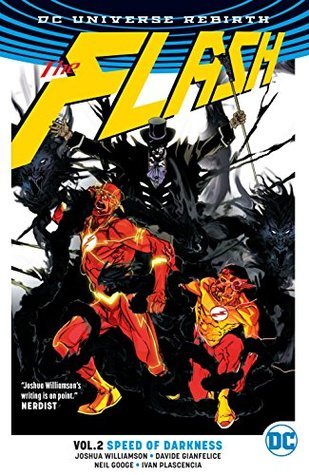 MY THOUGHTS ON VOLUME ONE:

I am not totally sure how I really felt about this volume. This reminds me a lot of the show, though I have to say I have recently fallen out of love with the series. I had a hard time getting into this volume as I wasn’t really digging the art but as the volume went on I really started to like it. I really enjoyed Godspeed and Avery so I’m hoping to see their characters develop in volume 2.

A new storm brews over Central City and disproves the old adage about lightning never, well…you know. Just as Barry begins to feel overwhelmed fighting crime, a new speedster debuts–but just where did this amazing new friend come from? Spinning directly out of the epic events of DC Universe: Rebirth, the Fastest Man Alive finds himself at the center of a DC Universe at a crossroads–and reeling from the reemergence of his protegee, Wally West!

This is what I said on Goodreads after I finished the comic:

“I wasn’t really expecting to like this because volume 1 was pretty meh and I am really exhausted lately but I actually really enjoyed this one. I’m hoping to read volume 3 when it comes out later this year.”

Though I think I disagree with this now that I’ve had time to think about the comic. While I was definitely more impressed with this volume than the first, I still wasn’t a massive fan of it. Overall, I was pretty bored and now that it’s been a month since I’ve read the comic, I really doubt I’ll read the third volume.

In this volume we really got to explore the relationship between Wally and Barry which I really liked. I think if you don’t know much about the comics or you’re interested in learning more about Wally West, Rebirth is  good place for you to start, especially because the series is so new and you don’t have too far to catch up.

I think in this comic I really realised why I preferred Francis Manapul’s series, 1 I just really preferred Barry in that series and 2 I have never been a fan of the Barry x Iris reltionship, especially in the show because they’re asically siblings and it’s too weird.

This is definitely a cool comic series but after waiting a couple weeks after I read the second volume I’ve realised that I don’t really care about Rebirth. I much prefer Manapaul’s series. The only thing I really care about in this series is Wally, Barry is wet and boring, whereas Wally is more interesting to me as I know a lot less about him.

Also, I think I’m just falling out of love with The Flash in general, I don’t watch the show anymore. Actually, in general I might have fallen out of love with DC completely. The only thing I really care about is the WW films (my mum’s excitement makes me excited) and I am still planning to see the Aquaman film, though I doubt I’ll see it in the cinema.

I think Barry Allen as a main character is too much of a wet towel for me, I much prefer a superhero like Iron Man or Spidey, a character who actually has personality and isn’t just a guy with a sad past.

I doubt it. I am interested in the storyline and how the comic series will end but I don’t really care enough to actually finish the series.

Have you read The Flash Rebirth yet? Are you a comic reader?