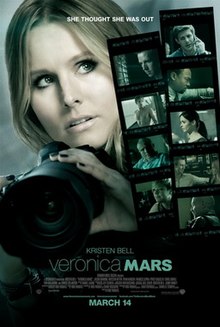 I’m sure for all the marshmallows who eagerly awaited more from the Mars universe, this was a brilliant addition to the world. However, for me, a marshmallow new to the franchise I felt slightly underwhelmed by this movie. I guess you could attribute my feelings on the movie to the fact that I had just watched the show and didn’t have to wait 10 years for a reunion.

Don’t get me wrong I’m probably going to watch the movie again tonight but I felt like it should of been more. I guess, though that that’s what always happens with reunions, it always feels like it should have been more. I must say though, that I much preferred this to the disaster that was the Gilmore Girls revival.

Weevil  – okay when I saw that Weevil was back I squealed, it was ridiculous. I was so happy that Weevil was going to be part of the storyline even if he didn’t have a major part.

Wallace – he’s a coach now. Woah, why? When the show finished (season 3) everyone was in their first year of College. Wallace had decided he wanted to be an engineer and he’d even put basketball aside to put more study hours in. And now he’s a highschool PE teacher? There was no explanation and I am stumped.

Mac – Ahh, yes Mac. I love this chick, seriously she is goals. Mac is spunky and will make your internet life a living hell. Towards the start of the movie we learn that Mac is now working for the Kanes, and that sort of sums up all of the information we get about her.

Although, I did like how at the end of the film she’s working with Veronica at Mars Investigations, they’re a really great team so if they ever do a revival (I pray) I can’t wait to see them back again as a team!

Logan – Logan, the man, the legend. The accused murderer, more like. Poor guy, he just wants to drive around his expensive car and stare at Veronica and now he’s being accused of murderer? Do people never learn? I swear I was having flashbacks, I mean how many times has this guy been accused of murder, it’s ridiculous!

I felt that this movie really put in perspective how selfish of a character Veronica can be.

At the start of the film we learn that Veronica is still with Piz (she’s been with the guy for what, 10 years and she hasn’t met the parents yet? I’m sorry, that’s bull.) Which is fine because I actually really like Piz, he’s a great character and he seriously needs a hug (and a better girlfriend). But oh my god throughout the film (and the show for that matter) Piz is constantly there for Veronica, and when Piz needs her? Where is she? She’s still in Neptune, with her ex.

1)Which isn’t really what bothered me, mostly it was that Piz’s parents travelled half way across the country to see her and instead of doing what she said she’s do and driving up to see them, she stayed in Neptune. I swear when Piz broke up with her I was actually happy, good for you Piz, go and find a girlfriend worthy of your time, you were too good for her anyway,

Wow, I’m really making it sound like I hate Veronica, I don’t, I just think Piz deserved better – I mean there goes a 10 year relationship!

Okay, I should talk about something different now, before I go another Piz rant.

2)Let’s talk about Wallace (whom I love). Wallace is still the wonderful, loveable guy from th series, he hasn’t changed much and that’s okay with me. Now, the thing is he’s been best friends with Veronica since roughly year 11 in High School and pretty much whenever she needs something he says How high?

In high school him sneakily taking student files from the office was cute, because we knew Veronica wouldn’t let him get in trouble for it. But now? Now, it’s not cute, it’s just highly illegal. At one point Veronica asks Wallace, a teacher, to get a file for a past student. Bad Veronica, not cool, he could lose his teaching license for that. But you know what he dies it, because it’s Veronica Mars.

3)Now let’s talk about the last thing that annoyed me about Miss Mars. Weevil. This poor guy, it’s been 9 or 10 years since he’s seen Veronica Mars and in that time he’s gotten married to a crazy hot chick and has a baby (who is adorable, oh my god). And now, she’s back and he’s being arrested for stuff he didn’t do (again) and everything was fine because Veronica got him out of that but then, then the end of the movie happened and I am mad.

Weevil hadn’t been on a motorbike for 3 years and hadn’t been part of a gang for something like 10 years and now Veronica has him back in a gang (as the leader, no less). What happened to the happy Weevil who went to his high school reunion and got the ‘most changed’ award? Well, that was short lived.